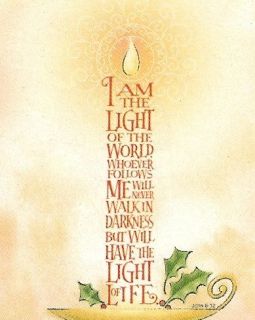 Advent 2016 In Praise of Light  CLICK HERE  – 12 sides, complete (8.8.16). This four-session resource helps participants deepen their appreciation of the gifts of L/light and energy during this season devoted to anticipating the Light of the World. Groups consider
~ Creation’s Light
~ the Christ Light
~ Darkness in need of L/light and
~ the Light within each person and all creation.

Quotes from Laudato Si’ join quotes from saints and scientists. Time is given for reflection, prayer, sharing, and socializing.

Although we’ve not yet celebrated Hallowe’en or Thanksgiving, some are already planning for Advent, 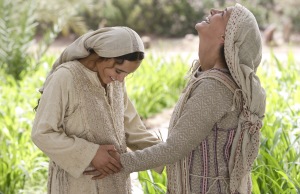 the first season of the Christian church year devoted to preparing to celebrate Christmas. Christmas, in turn, celebrates the Incarnation, the embodiment of divinity in Jesus’ humanity. (Cf. my Advent blog Nov. 17, 2013.)

The Incarnation is a Mystery that a lifetime of contemplation would not exhaust. Advent is the time when we are specifically called to deepen this contemplation. Many individuals and groups use various materials to help them use well this prayer time. My contribution is Advent in the New Universe Story. It offers one page per week to explore the place and significance of the Christian story within the 13.8 billion years of creation. Theologians and others are writing about the transitions needed for this integration, and these Advent pages contain some of their insights.

Advent in the New Universe Story will be available in French and Spanish as well as in English. The English version is now available.

The resource contains suggestions for the convener, and the weeks include excerpts from that Sunday’s Scripture readings, information, time for prayer and for sharing, and suggestions for further reading.

I am indebted to the Society of the Holy Child for supporting my ministry and, for Advent in the New Universe Story, to T.J. Murphy for checking the science, to John Surette, S.J. for checking the theology, and to Nancy Frommelt, O.S.F. for fine tuning the text. I am also indebted to those who gather to use my resources; their feedback contributes significantly to future resources.

To find this resource, go to Advent on my website.

I post this in November, well before Thanksgiving. It might seem early to be writing about Advent, perhaps like selling Christmas decorations before Hallowe’en. But since only two days separate Thanksgiving and the first Sunday of Advent, I decided to post this now.

Fair warning: At the end of this blog I shall suggest that you check out my Advent resource: In Praise of Light. You might like to use it, alone or with others, in December. But first:

For those not familiar with Advent, it is the first season of the Christian

church year.  The word is from the Latin ad (to) and venire (come), and it is used for the arrival of any notable person, thing, or event. The capital “A” indicates its Church meaning: the four-week preparation time before the celebration of Christmas. Individuals, families, and church congregations often use Advent wreaths and prayers to help them “keep Christ in Christmas”; purists sing Advent hymns, saving Christmas carols for Christmas Eve and after; individuals lovingly choose to do or not do something each day in preparation. 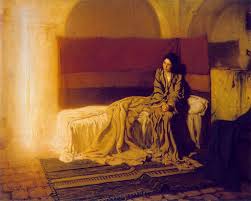 We remember the story in Luke’s Gospel that says the angel Gabriel appeared to Mary and essentially asked if she would bear the Messiah. When she agreed, he explained that “the Holy Spirit will come upon you.” During her pregnancy Mary resolved some obvious confusions of her betrothed, Joseph; she visited her cousin Elizabeth; and she and Joseph made the trip to Bethlehem that we celebrate each year.

For those readers who have experienced Advent, how do you feel about it? How would you describe it to someone who never heard of it? How might your explanation have changed over the years?

Decades ago I lived in a community that celebrated Mass every afternoon in the convent chapel. Various priests presided. It was generally lovely and the sisters were suitably silent throughout. One presider made the mistake of starting his homily by saying how grim and depressing Advent was. Old-, young-, and middle-aged sisters spontaneously spoke out in disagreement. Maybe being Sisters of the Holy Child had a lot to do with that, maybe it had feminine roots. In any case, we clearly loved Advent.

I will not get into the historicity of the story, or why it became part of Scripture. I will, instead, address some of the growing pains I experienced in my almost-80 years, and how the changes have enriched the story for me.

when it all began. I used to date it from the Annunciation, celebrated nine months prior to Christmas. Sometimes I’d think about Mary’s parents (rarely Joseph’s!). Decades ago this event for me (and, I dare say, for many) rarely dated much before Jesus’ conception.

But roots are important. I now know that Jesus’ story lives within a far larger story and is 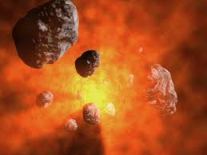 intrinsically webbed within it. Scientists might not know exactly what caused the first flaring forth, but they agree that it happened about 13.8 billion years ago. From that event in spacetime came billions of years of expansion, stars developing and exploding, and 4.56 years ago the formation of our planet from the stardust resulting from the explosion of “our” star. Earth’s story is complex and fascinating, and I won’t attempt details here. What’s notable is that Jesus’ story can be traced all the way back (as can ours), and it develops within this larger story, something that no Scripture writer — or early catechism writer — could have guessed.

Another change for me is hard to understand. Not the change itself, buy why it took so long for me to make the change. On the one hand I believed that God was everywhere and was infinite. Yet, simultaneously, I celebrated “his” coming with the birth of Jesus: divine life had finally arrived! With maturing images for the Mystery we call God came the grace to integrate divinity from the beginning, a sacred presence living and acting from within. After all, where is God not? We can rejoice in the divine presence for billions of years, not just 2000. 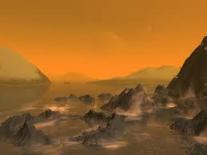 In The Battle for God, Karen Armstrong writes that each pivotal event in one’s religious story “is not simply an incident that happened once . . . ; it is also an occurrence that happens all the time. We have no concept or word for such an event, because our rational society thinks of time in a strictly chronological way.” That addresses another needed change: Why go through this waiting for Jesus’ birth each year when we know he already came? Karen’s resolution: “Because the fundamental rhythm of life that this mythos had revealed was actually taking place … [the story points] to something fundamental and universal about the world.”  What would that be for Advent?

In searching our hearts for reasons why Advent reveals what actually takes place, we need not limit our scope to what is happening in our own lives — important as that is. Since we and everything on Earth are literally from the same stardust, we can ask how this waiting is experienced by all of creation. What are the birth pangs and the hopes that creation is experiencing? What journeys are needed to reach a better future? What does this call us to be and do?

Advent resource for individual or group use

Which leads to my suggestion about In Praise of Light, available free at https://ecospiritualityresources.com/advent/. This 4-session, adaptable Advent program (available in English, Spanish, and French) helps individuals and/or groups to deepen their understanding of the divine presence living and acting within our Universe. This season’s special focus is on the gift of light: Creation’s, Christ’s, darkness, and the light within. It calls us to care for God’s creation, particularly through wise energy choices.

These Advent and Lent resources have been  used and enjoyed by groups in many countries. This photo is from St. Gertrude Parish, Chicago, IL, USA. I might use a photo of your group next year! 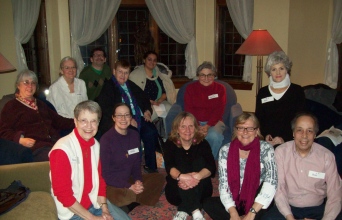