If ever we needed reminders of the fact of the interconnection among all existence, as affirmed by cosmology, quantum physics, and other sciences — as well as mystics and saints — it is now, when dualistic thinking is causing havoc. Whole groups are being vilified and artificially separated from the rest: “winners” from “losers”; “good guys” from whoever the judging group happens to be; humans from Earth, our common home with which we share existence. Lent offers a good opportunity to “re-pent” — re-think — these rifts.

Everything has come from elements resulting from generations of exploding stars. Our Solar System and everything in it developed from a shimmering cloud of stardust elements like calcium, carbon, and hydrogen resulting from a supernova explosion. Thus we, too, are made of stardust elements. On Ash Wednesday, Christians traditionally receive a cross of ashes on their foreheads to remind them that they are dust. The following ritual is meant to enrich this realization by reminding us that, even before we are dust, we are stardust!

Needed: one candle and a dish of dirt (or glitter, representing stardust). Decide who will read.

Leader: To begin, let us pause to recall past times when

we have received ashes on our foreheads and heard words like these: “Remember that you are dust, and to dust you shall return.”  Remember how that influenced your practices during Lent.

Pause to Reflect.
Carry those thoughts and graces with you now, but place them in a larger context: the context of the entire universe and its amazing 13.8 billion-year history. After billions of years, thanks to the divine Mystery living and acting in our world and in us, stars formed and died in the process of bringing Earth to existence. We became part of this blessed creation. We are connected to all life; we have a role in this sacred story!

Reader One: The massive star that was mother to our Sun met with fiery death, her form completely annihilated by the explosive force of the blast. And yet she exists in each of us, in the cells of our bodies that are composed of her dust. Consciously or not, we carry her within us as surely as we carry the DNA of our biological parents. (Radical Amazement, Judy Cannato)

Reader Two: Our planet Earth was once a dancing star, evolving over four and a half billion years ago from the many elements of [an exploding] supernova. I have loved knowing that we are “made of stardust” . . .  I like knowing that the composition of my body has the elements of a star that was once brilliantly aglow in the universe and is now dancing in me. There’s a magical sense of connection that comes from this knowledge . . . . (The Cosmic Dance, Joyce Rupp)

in the air at all times, unnoticed until sunlight bathes them in radiant streaming light. In this warmth, the specs sparkle. No one who cares about shiny furniture is unaware of what dust can accomplish, just by being. Nothing is insignificant in our universe!

Litany of gratitude:
•  for the Spirit present within the creative process of creation and within each of us, We are grateful.
•  for the generations of supernovas that exploded, resulting in stars with increasingly more of the heavy elements, eventually leading to the supernova that resulted in our solar system and galaxy, We are grateful.

Sharing:
Jesus, too, was stardust! Jesus, too, died to give new life, as each seed must do. How might we connect the creation  story with our Lent experiences this year? How might our Lent resolutions reflect our call to care for E/earth?

and which took over 4 billion years to form on Earth, keep us humble — humus is the Latin for soil. May it remind us of who we are and how vitally we interconnect with the rest of creation. May we trust in divine power working in us for the good of all creation.  Amen.

Individual blessings, using soil (or glitter):
Depending on the number of participants, either divide into pairs, each member blessing the other with soil from the center bowl, or form a circle and pass the bowl of soil, each blessing the person on his or her right. 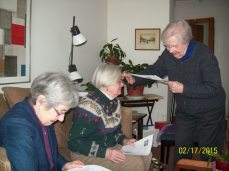 Thank you, (name), for bringing your starlight into my life. I bless you and the star-stuff you invest in caring for all of creation. (Add anything you may wish to say at the beginning of our Lenten Journey.)