RESPONDING TO THE INTERGOVERNMENTAL PANEL ON CLIMATE CHANGE’S REPORT (IPCC)

Readers who believe that all of life is interconnected, and that God has been living and acting in planet Earth throughout its 4½-billion-year story, are highly motivated to respond to the March 31, 2014
Intergovernmental Panel on Climate Change (IPCC)’s Report by the
world’s international climate experts. (Summary Report: http://www.climatechange2013.org/images/report/WG1AR5_SPM_FINAL.pdf)  The Chinese proverb’s warning was never more needed: Unless we change our direction, we’ll end up where we’re going.

The peril is even more certain, and more frightening, than past IPCC assessments stated. The Summary begins starkly: Human interference with the climate system is occurring, and climate change poses risks for human and natural systems. Climate extremes are unequivocally caused by human activity.

Risks, benefits, and outcomes of adaptation are predicted for the near-term and longer-term. Statements are labeled by authors’ confidence degree: very high, high, medium, or low.  The list of  very high confidence  risks is staggering. All risks, and solutions, involve emission levels. Greenhouse gas emissions will have to drop by 40-70% by 2050.

Earth has had 5 extinctions. None had human causation, obviously. No human should want to be responsible for #6 —  though many factors indicate we are already causing it.

But it is not too late to keep the global temperature at a manageable level — if the world embarks quickly on an intense effort over the next 15 years.

Climate change can be addressed without affecting living standards, they report, and with only a tiny reduction in economic growth. The IPCC report concludes that diverting hundred of billions of dollars from fossil fuels into renewable energy and cutting energy waste would shave just 0.06% off expected annual economic growth rates of 1.3%-3%. This investment would save the billions needed to repair losses from extreme climate events.

In addition, it would prevent deaths and destruction from future weather extremes. It would provide   global economic opportunity we can seize today,  Sec. of State John Kerry said. So many of the technologies that will help us fight climate change are far cheaper, more readily available, and better performing than they were when the last IPCC assessment was released less than a decade ago, Kerry said. And cleaner air and fewer climate calamities would have positive effects for, e.g., health, job creation, and food production.

The report is clear: the more you wait, the more it will cost [and] the more difficult it will become,  said EU commissioner Connie Hedegaard.

quadruples by 2050. Companies and individuals must rapidly wean themselves off coal, gas and oil and fund low-carbon growth in poorer countries. Along with measures that cut energy waste, renewable energy – such as wind, hydropower and solar – is viewed most favorably by the report as a result of its falling costs and large-scale deployment in recent years.

Readers already committed to reducing fossil fuel emissions that exacerbate climate change are often puzzled by climate deniers and those who continue to spew greenhouse gases that clog our atmosphere. Will this report wake us all up to the immanent danger and changes that must be made immediately?

Here are some of many actions that can be taken to change attitudes and atmosphere. Trust that still, small voice that says: This might work and I’ll try it.  (Diane Mariechild)

– Appreciate the gift of creation and the billions of years of evolution. Don’t do anything, just stand there! (David S. Toolan, SJ) Fall in love with creation! Be awed by what has evolved and what we and future generations could lose.

– What would you say to parents who continued to give their children food that already makes them sick and that 97% of reputable food experts judge to be toxic? What could you say to climate deniers you know?

– Deepen empathy for those who have invested in land and machinery, lobbying and media ads  for mining fossil fuels. It won’t be easy for them to change. Send strong, loving energy to support their, and its, “conversion.” Pray for Mother Earth’s healing.

– Lobby for reduction of military budgets and for applying those massive sums for renewable energy. (According to TIME, April 28, 2014, the U.S. defense spending totals $640 billion, $452 billion more than #2 defense spender, China.)

– Encourage institutions to divest from fossil fuels and invest in renewables. (Archbishop  Desmond Tutu advocates an anti-apartheid-type campaign against fossil-fuel companies, which he blames for the  injustice  of climate change.)

– Reduce driving, but if necessary, drive no faster than 55 – 60 MPH. This results in notable reduction of fuel and of pollution — and it saves money at the pump.

All ministry will be futile if — through our ignorance, indifference, or refusal to act — Earth’s ecosystems are destroyed. Nobody makes a greater mistake than those who do nothing because they could only do a little! 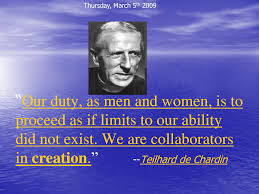 2 thoughts on “RESPONDING TO CLIMATE CHANGE”