A cosmology is not just a theoretical enterprise, but a way also to gain our bearings in the inner world.
Mary Conrow Coelho

More and more people are deepening their awareness of Teilhard de Chardin‘s insight:

In Teilhard’s estimation . . . it is in us, and as far as we yet know, only in us, that the Creation has become self-aware. Our eyes are the eyes through which the Earth finally beholds her own beauty, and, just as importantly, knows that she beholds it. Human beings are not above the Creation, but are themselves the Creation, that part of the Creation that is self- conscious.  John R. Mabry

I found that a hard saying when I first heard it (from Miriam MacGillis in 1979). It took me years to identify myself that way, steeped as I was in a cultural paradigm of separate, isolated components with humans in a compartment by themselves. I still pray to deepen my awareness of being integral with the rest of creation, helped now by many authors, speakers, and the “field” of awareness in which I live — to which readers of this website undoubtedly already contribute.

Various theories of levels or stages exist. Mary Inglis, presently based at Findhorn, Scotland, wrote an article about this decades ago that I still find helpful: “Journey to Wholeness: The Message in Myths.” Originally published in OneEarth magazine, it follows the interplay between the masculine and feminine principles/energies. I find Inglis’ three basic stages of this evolution applicable for other topics as well.

See if you find these very simplified highlights (which Mary has approved) of her article applicable to the interplay between human consciousness and our relationship to the rest of creation — historically and/or personally:

1. Unconscious, undifferentiated, pre-conscious oneness; it precedes polarity in human thought; human life patterns correspond with those of the natural world

2. Awareness of separate identities; exploration and deeper understanding of different components of creation; scientific belief that everything is atomic; dualities, dominance, competition

3. Conscious return to unity and interdependence, fully honoring variety and complexity and their interconnectedness.

Inglis does not name Thomas Berry‘s three cosmic principles (communion, autopoiesis, differentiation) or quote him (e.g. Nothing is itself without everything else.), but her third stage affirms them.

[The third step] involves a willingness for grace to be active in our lives, for there is an element in it in which we do not choose it: it chooses us, if we are ready and open. . . . It asks that our actions and autonomy may reflect and be in the service of  a larger wholeness. . . And it is not a step that is taken once and for all, but is required to be made again and again, for it arises out of the continual pull to both self-sufficiency and self-transcendence.

Ultimately the individual conscious self only has meaning as it becomes a revelation and expression of the larger whole. It is through the capacity to surrender that the connection between the two is made, allowing the life of the spirit to guide and inform our actions, and bringing us to the knowledge and experience of our essential unity and interdependence with all creation and to the expression of this in our lives. As this happens, we return to the place from where we started, and know it for the first time.

I think of this article when I read quotes like the following: 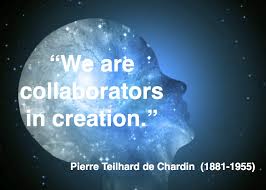 There are no independent entities. Human individuality is not to be confused with human independence. We depend on the functioning whole and derive our being from it.  Mary Conrow Coelho

CONSCIOUSNESS OF THE DIVINE

Believers might find these stages applicable also to humanity’s consciousness of the divine. Perhaps they would be helpful to people who feel they have “lost their faith” — when they’ve just moved out of Stage Two and have not yet settled into Stage Three.

During humanity’s journey, cultures and religions immersed themselves in, named, and often fought over, their god(s). Mystics in various religious groups took the lead in “leaving god to find God” as they reached Stage Three. Modern science often helps people reach it, as do theologians and mystics like Teilhard de Chardin – but it’s often hard!

The journey requires careful discernment of what to bring forward, what needs reinterpreting in light of new knowledge, re-creating systems that no longer function effectively within a new wholeness. Thomas Berry warns/challenges that it requires “reinventing the human.” Teilhard de Chardin reminds us that “We are collaborators of creation” and the energies of Love make all the difference.

We are, indeed, united with the cosmos and with the divine — understanding them distinctly, yet transcending isolation as we become aware of our interconnected whole and our role in co-creating it.

Inglis’ three stages of evolution help me “transpose” all religious writing that took place in Stage Two and make sense of it in our own evolving worldview.

Even Jesus‘ prayer in John 17 — That all may be one as you Father are in me and I in you. I pray that they may be one in us. . .  — can be understood in this light. The unity already exists; our task is to live into consciousness of it.

8 thoughts on “Stages of Cosmic Consciousness”