Signs of hope for creation can seem scarce, but think of this: From September 1st until the Feast of St. Francis, October 4th, church members — and the non-churched — throughout the entire world will join to celebrate and protect the gift of creation.

Watch for action organized by other groups that will take place during those dates, like the September 8th Rise for Climate rallies throughout the world and the September 10-16 Story of Stuff project, when volunteers around the world will be picking up plastic litter and tallying what brands and products show up most often. (This data will help the #breakfreefromplastic movement to get at the sources of plastic pollution.)

Think of the difference joining in prayer and action during this season could make for all of our planet!

Background: These dates were first chosen by the Patriarch of Constantinople in 1989. The World Council of Churches has promoted this season since 2008, and its popularity has spread throughout the entire Christian world. In 2015, Pope Francis named September 1st the World Day of Prayer for the Care of Creation and asked Catholics to participate in the entire season of celebration and care. 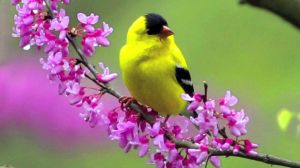 Theme(s): I have read different information about the theme. One group lists it as “walking together.” Another lists the theme as “Your Father Feeds the Birds and Clothes the Flowers in Beauty.”

Christians will recognize “Your Father Feeds the Birds and Clothes the Flowers in Beauty” as taken from Matthew 6: 25-33. It invites our focus on what Matthew reports that Jesus said about the providential care of our Creator for the continued well being of Creation — which, of course, was not threatened in Jesus’ time.

(Closer to October 4th I shall post information for celebrating the feast of St. Francis, which has its own theme: “Who is My Neighbor in a Climate – Threatened World?”)

The entire Season of Creation provides an excellent opportunity to reflect on whether our actions uphold or upset the well-being of creation. It’s very important to take the matter of care of creation out of the political arena and return it to the moral and religious one where it belongs.

The recommended words from Matthew are challenging. To save you from researching them, I shall quote them using the translation from the Eugene H. Peterson’s translation (including his italics). This might help us look anew at Jesus’ message. As you contemplate these words, remember that they reflect the religious imagination of his time, which placed God in human form somewhere away from us. Today we strive to image the divine as living and acting in us and in our world, and we rejoice in the divine presence everywhere.

“If you decide for God, living a life of God-worship, it follows that you don’t make a fuss about what’s on the table at mealtimes or whether the clothes in your closet are in fashion. There is far more to your life than the food you put in your stomach, more to your outer appearance than the clothes you hang on your body. Look at the birds, free and unfettered, not tied down to a job description, careless in the care of God. And you count far more to him than birds.

“Has anyone by fussing in front of the mirror ever gotten taller by so much as an inch? All this time and money wasted on fashion — do you think it makes that much difference? Instead of looking at the fashions, walk out into 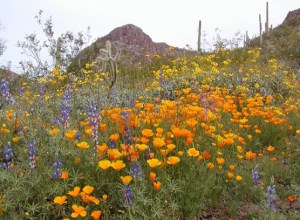 the fields and look at the  wildflowers. They never primp or shop, but have you ever seen color and design quite like it? The ten best-dressed men and women in the country look shabby alongside them.

“If God gives such attention to the appearance of wildflowers — most of which are never even seen — don’t you think he’ll attend to you, take pride in you, do his best for you? What I’m trying to do here is get you to relax, to not be so preoccupied with getting, so you can respond to God’s giving. People who don’t know God and the way he works fuss over these things, but you know both God and the way he works. Steep your life in God-reality, God-initiative, God-provisions. Don’t worry about missing out. You’ll find all your everyday human concerns will be met.”

My challenge (and hope): Write one paragraph stating the essentials of this ever-relevant message — perhaps incorporating thoughts from “walking together” — with contemporary understanding of creation and the threats to its well-being. OK to include quotes from Laudato Si’. End with a short prayer. Post in Comments so we can all be enriched by each other’s wisdom and compassion. If writing doesn’t “grab” you, at least try it in your head.