In November, religious traditions and international observances call our attention to deaths, extinctions, and thanksgiving for what remains.

For Catholics, November begins with days devoted to deceased members of our immediate and global family. We remember them all month, including the increasing numbers of men and women who have been murdered for their work preserving our common home.

It is also Native American Heritage Month, a good time to remember Native Americans’ unjust deaths, and the deaths of their cultures, languages, and religions. We strive to stop the current efforts to eliminate their sacred heritage burial grounds, plants and wildlife, and vital watersheds.

November 11th is Veterans Day in many countries. We remember the men and women who gave their lives for their countries.

In the United States, on Thanksgiving we give thanks for all of nature’s gifts. We remember those who have less.

November ends with the International Remembrance Day for Lost Species (Nov. 30). Pope Francis calls us to be people “joined … so closely to the world around us that we can feel the … extinction of a species as a painful disfigurement.” Some dismiss the loss of one species, forgetting that all life is interconnected because we all began with the first flaring forth and we are now interconnected by invisible atoms. As Thomas Berry said: “Nothing is itself without everything else.”

It is important to grieve with others (in person, virtually, or in spirit) on or near November 30. The following prayer ritual can be used on any day, alone or with others. Alter it in any way that will help you (and others) grieve and be motivated to stop extinctions and the many deaths that result from the loss of species.

Use two candles; prepare suggested (or other) music and video. 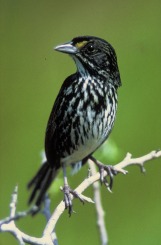 . . .today, the dusky seaside sparrow
became extinct. It may never be as famous
as the pterodactyl [ˌterəˈdakt(ə)l] or the dodo,
but the last one died today . . . .
An excerpt from “Science” by Alison Hawthorne Deming

What you call resources, we call our relatives. Source unknown.

Don’t ever apologize for crying for the trees burning in the Amazon or over the waters polluted from mines in the Rockies. Don’t apologize for the sorrow, grief, and rage you feel. It is a measure of your humanity and your maturity. It is a measure of your open heart, and as your heart breaks open there will be room for the world to heal.
An excerpt from World as Lover, World as Self by Joanna Macy

Light the first candle. It honors all the species that have gone extinct in our lifetimes.

Great Giver of Life, we pause to remember our place at the beginning of the Sixth Great Extinction on Planet Earth. For 13.8 billion years creation has been groaning: bringing to birth, becoming more complex, more organized, more conscious. The other great extinctions during the past 450 million years happened by forces beyond anyone’s control. For the first time, our species is ruining whole ecosystems, aborting entire interdependent species. We acknowledge that we play a part in this dying by our carelessness, ignorance, and indifference. Forgive us our part in the death of healthy ecosystems and the resulting extinction of creatures in whom we believe divinity lives and acts.

We affirm the Sacred Mystery that caused and continues Creation.

We affirm the 13.8 billion years of our Universe.

We affirm the multiple transformations during the 4.5 billion years of Mother Earth’s life so far, and the potential for evolution towards ever-greater consciousness.

We affirm the millions of species that have inhabited our planet in beautifully-webbed communities: microorganisms, plants, fish, birds, mammals . . . .

We affirm that we came from Earth and exist, like all species, in a communion of subjects.

We grieve humans’ lack of awareness of, and concern about, the destruction of interdependent communities that have taken billions of years to develop.

We grieve the climate disasters that extinguish habitats and the multiple species within them.

We grieve the more than one-in-four flowering plants, the one-in-five mammals, the nearly one-in-three amphibians, and the one-in-eight birds that are vulnerable to being wiped out completely. (International Union for the Conservation of Nature)

We grieve the Golden Toad (pictured here), native to Costa Rica. It has not been seen since 1989, when a single male was found, the last of its species.

We grieve the Pyrenean Ibex (pictured here). The last of this species naturally born was a female, Celia, who died in 2000.

We grieve the St. Helena Olive,

a small spreading tree, the last of which perished in 2003 primarily due to deforestation and invasive plants.

We grieve all our extinct brother and sister species, the amphibians, fish, birds, mammals, plants and trees, and their diminished habitats.

We grieve the humans whose sustenance and livelihoods are threatened by this disruption in the food web.

We grieve the deaths of ecological martyrs: Sister Dorothy Stang, Dian Fossey, Chico Mendes, Berta Cáceres, and the over 1000 other activists slain since 2004. We grieve those who, like the Water Protectors at Standing Rock, are harassed and injured by police and the companies they oppose. (Global Witness reports that, on average, two people die every week.)

LISTEN TO or SING:

* Extinguish first candle. Light second candle. It honors the threatened species that remain and our desire to protect them.

QUIET REFLECTION:
For believers, our faith is tested by our concern and care for creation. U. S. Catholic Bishops: “Renewing the Earth” 1991

Let us not leave in our wake a swath of destruction and death which will affect our own lives and those of future generations.  Pope Francis

WATCH: Google either one:

LITANY of GRATITUDE and HOPE

We are grateful that the ever-controversial Endangered Species Act (ESA, U.S.) has indeed saved many species under its  protection. One example among many is the bald eagle, once threatened as a direct result of the use of DDT.

We are grateful that the Zoological Society of London released its list of birds most at risk of extinction based on evolutionary distinctness and global endangerment (EDGE). This information will help conservationists decide where efforts should focus first.

We are grateful that the American grey wolves, virtually extinct in the Lower 48 States by the 1930s, are now so abundant that many want their population lessened to protect cattle-raising.

We are grateful for all of the habitats that have been saved so that the interdependent species within them can escape extinction.

We are grateful for the many people throughout the world who dedicate their time and efforts to keeping habitats and species alive so they can give praise to their creator by their distinct lineages, attributes, and contributions to the web of life.

To save species, we must save ecosystems. To save ecosystems, we must reduce climate change, pollution, poaching, invasive species, and over-consumption. On the following action list, mentally check the things that you already do to protect species (which includes our own, the human species). Note anything you could add to your endeavors.

What kind of Earth “could be”? How can we contribute to co-creating it?

Great Giver of Life, we come from, and we dwell in, the magnificent world in which you live and act. Our species is causing extinctions; our species can prevent them. Let us not be thwarted by the immensity of the challenge, for the Power working within us can do more than we could imagine. May the flame of this candle we now extinguish continue to burn in our hearts, reminding us to help our threatened relatives.

Enlighten us to find you in all Creation; empower us to treat it accordingly. Through Jesus Christ, whose respect for Earth inspires us to live as he did. Amen.

“The Heavens Are Telling the Glory of God” or “Touch the Earth” (Kathy Sherman, CSJ) or another appropriate song